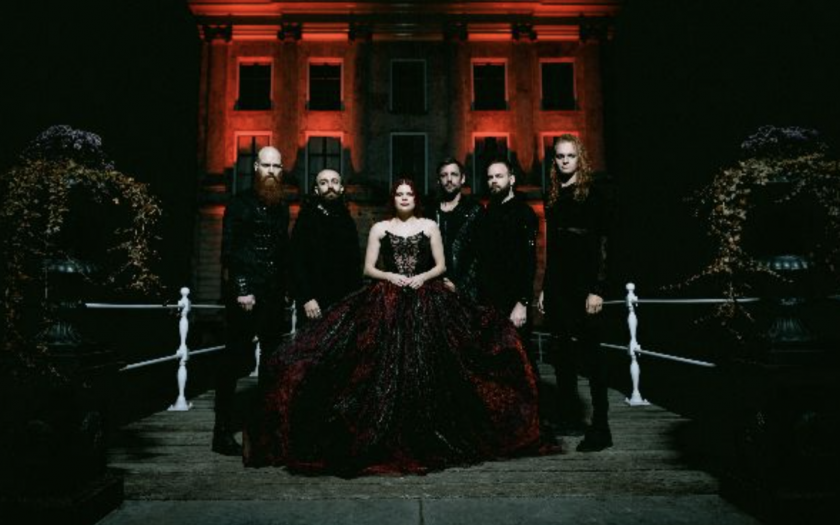 Having refined their broody, mesmerising vision of gothic/symphonic metal to cinematic levels, with three EPs and a full-length album behind them, BLACKBRIAR continue to set their sails towards the future. The Netherlands based band are proud to announce their signing to Nuclear Blast Records, and are currently working towards their second full-length album, accompanied by long-time collaborator, Joost van den Broek. Today, the band have released a brand-new song titled ‚Crimson Faces‘.

Singer, Zora Cock comments on the signing:
„Dear fans, we’re so excited to have partnered up with Nuclear Blast Records!!! Having been an independent band for many years, we’ve finally found the perfect fit that makes our dreams come to life! Joining forces with this incredible label is a huge step for Blackbriar! We promise you that there are a lot of exciting things coming, starting with a brand-new single that’s OUT NOW! Listen to ‚Crimson Faces‘ on all music platforms, and let us know what you think! ❤ Love, Blackbriar.“

Jens Prueter, Head Of A&R Nuclear Blast Europe:
“Please warmly welcome Blackbriar to the Nuclear Blast family! It has been a pleasure to meet them at Joost van den Broek’s studio and to get a sneak preview on the exciting things to come. We’re thrilled to work with such a creative team. It’s amazing what the band have already achieved completely DIY, creating a unique world of their own. Expect to be enchanted –this is probably the biggest gift that artists can give us.”

Zora Cock continues about the new single:
„Crimson Faces tells a story of being haunted by ghosts, jealousy, and insecurities, based on the old classic Gothic novel ‚Rebecca‘. You asked us to make a different kind of music video, one of us performing instead of portraying a story, and we thought Crimson Faces was the perfect song to do this with. We hope we’ve fulfilled your wishes!“

BLACKBRIAR LIVE:
June 9-11, 2023 Into The Grave, Leeuwarden, Netherlands
More to be announced soon.

About BLACKBRIAR:
Formed in 2012 by Zora Cock, René Boxem, Bart Winters, and Frank Akkerman, Blackbriar crafted their first single in 2014 with ‚Ready to Kill,‘ but it was 2015’s second single ‚Until Eternity‘ that truly propelled them into the scene. A sweeping track with an equally compelling and beautiful video, it continues to draw many to the band with over 18.1 million views since its debut. Taking advantage of the growing buzz surrounding them, they independently recorded and released their first EP, Fractured Fairytales, as well as acquiring a second guitarist in Robin Koezen. This EP laid down an impressive foundation for the band’s ethereal, breath-taking sound, and brought about new opportunities, including tour dates in The Netherlands, Germany, Belgium, France, Switzerland, Czech Republic, Hungary, and more, where they played alongside EPICA, HALESTORM, IN THIS MOMENT, DELAIN and MAYAN. To keep moving ahead with full control of their creative ideals, the band successfully crowdfunded their follow-up EP, We’d Rather Burn, and brought it to life in October 2018. This EP would be the first time the band worked alongside esteemed producer Joost van den Broek, and this fruitful collaboration allowed Blackbriar’s whimsical and enigmatic sound to reach new sonic heights. Released the same day as their self-made video for ‚I’d Rather Burn,‘ the EP showcased a stronger sense of dreamy atmosphere and brought listeners beautifully grim tales of witches, banshees, and sea sirens. Keyboardist Ruben Wijga (ex-Re-Vamp) began to take on a larger role and began playing shows, having been involved in the song writing process since Fractured Fairytales.

A busy 2019 followed, the band released the haunting single ‚Snow White and Rose Red‘ in May. A duet with Ulli Perhonen, their take on the Grimm’s fairy tales featured striking cinematic visuals to accompany the spellbinding track. Continuing to dig deeper into fairy tale realms, BLACKBRIAR closed the year with their third EP, Our Mortal Remains. Ever sharpening their intoxicating blend of storytelling and breath-taking musicianship, the EP brought about new live opportunities as well. Small, sold-out tours with EPICA in 2019 and 2020, as well as a sold-out opening performance for Delain’s Apocalypse & Chill release show in Utrecht followed, with future plans then put on hold due to COVID-19. Championing their continued independence, which included everything from song writing, maintaining their web presence, overseeing merch, as well as shooting and producing their own videos and photos, Blackbriar reached out to their ever-growing and loyal fanbase for assistance to make their full-length debut album a reality in 2020.

Fans fervently heeded the call, reaching the € 25,000 goal in under 24 hours, ending with a total of € 70,000. It was an impressive accomplishment for an independent act, which shows their strong internet presence, with over 214,000 YouTube subscribers and 46.1 million channel views, as well as 27.6 million Spotify streams and 150,000 monthly listeners. Entering 2021, the band relinquished a bit of control in signing with Doomstar Bookings to help properly support their first full-length album, The Cause of Shipwreck, which was released in April. It was recorded with renowned producer Joost van den Broek (Epica, Ayreon, Powerwolf) at Sandlane Recording Facilities, and this release showcased the band’s continued evolution into masterfully dark gothic storytelling and theatrical aesthetics. On the live front, the band launched into success with six sold out Dutch club shows, later extending into more European territories such as Germany, Belgium, Switzerland, France, and the Czech Republic.

Despite a very successful 2021, the band still hungered for more, unleashing their latest single, ‚Fairy of the Bog‘ in December. The track is a mixture of folklore, myth, and ancient local history in a more mystical and magical package, showcasing what BLACKBRIAR does best. In April, the band parted ways with founding member and bassist Frank Akkerman, welcoming Siebe Sol Sijpkens from The Netherlands as their new bassist. A happy and energetic performer with a lifetime of global performances, he is a welcome addition to the act as they continue to strive forward. With their vision looking firmly into the future, with a major label behind them, they’ve set their sights on 2023 to conjure their most deadly siren song yet. With accolades behind them, such as being nominated three times for ‘Best Artist’ in EuroSonic/Noorderslag‘s Popgala Noord Awards (2018, 2020, 2022), and continued fan support with current monthly streaming totals on YouTube and Spotify nearing 1 million streams, the world is primed and ready for a spectacular journey ahead. BLACKBRIAR continues to soar, ready to lure you into the sea to be swept away by addictive hooks, cinematic soundscapes, and darkly whimsical storytelling.