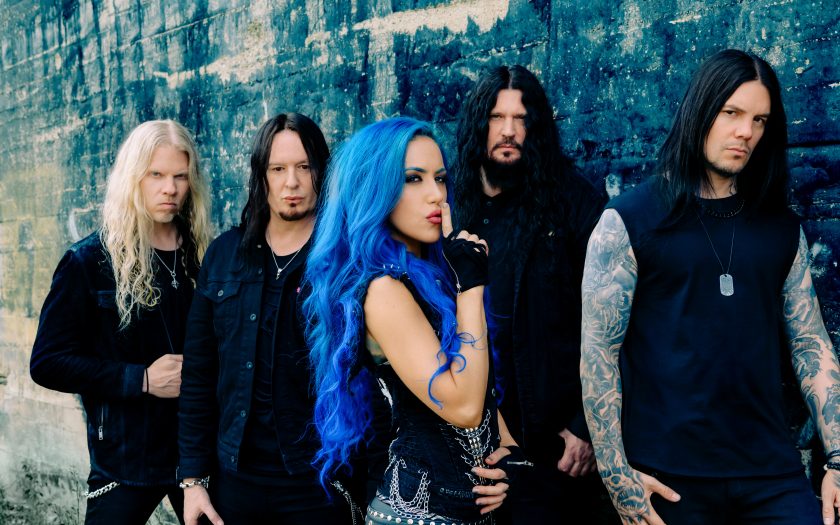 the last few years have taught us anything, it’s 2 that we need regular, jolting doses of heavy fucking out, melodymetal to keep us on the right track.

Over the last quarter of a century, no band has flown the flag for balls stuffed heaviness with more vigour or dedication than Arch Enemy. In 2022, the ba nd’s brand new album, Deceivers, is destined to be this year’s most lethally effective cure for all ills. Increasingly unstoppable, not least since the recruitment of vocalist Alissa White Arch Enemy are about to remind the world what the reaGluz in 2014, l thing sounds like, with their 11 explosive album yet. th and most

“We achieved so much with those first two albums with Alissa,” band founder and guitarist Michael Amott notes. “Both Will To Power and War Eternal did so well for us. We just kept building and building and we didn’t expect that. When Angela [Gossow, Arch Enemy’s iconic former vocalist] left the band initially, I thought the band would go down to some extent and we could slowly build it back up to wh ere we were when she left. But instead, with Alissa, it just took off and became a whole new thing.”

The wind billowing their sails and an everexpanding audience of diehard fans, Arch Enemy arrive in 2022 in the finest of form. Written during 2020, Decei vers is another selfevident labour of heavy metal love, from a band with confidence coursing through every vein. As Michael observes, Arch Enemy have successfully negotiated the ups and downs of the Covid era and come out the other side armed with their m ost destructive piece of work yet.

“Our last concert was December 15, 2019,” he recalls. “So then we took a year off, because we’d been in everyone’s faces for a while, and we thought we’d start writing a new album and start recording it at the end of 202 0… and that’s what we did! In January 2020, me and Daniel [Erlandsson, drums], went over to Mexico and rented a place for a couple of weeks. It was on the beach, which was great, but we turned the living room into a little makeshift demo studio, with a cou ple of guitars and programmed drums. It was just nice to take time out and get away from everything. We did quite a lot of demoing there, but then the pandemic hit. I was stuck in Sweden, as was Daniel, so we continued writing. There weren’t really many restrictions in Sweden, we didn’t have lockdowns like most of the world, so it was kind of easy to meet up and keep working on the music.”

Despite not being denied the chance to write new music, Arch Enemy would soon face some significant obstacles when it came to getting the whole band together in the same room. With Alissa and guitarist Jeff Loomis both residing on the other side of the Atlantic, the creation of a new album became rather more challenging than expected.

“It did turn out to be the worst time ever to have an international line-up!” laughs Michael “That part of it sucked. It was like, ‘Now we want Alissa to come in and do the vocals, and Jeff to come in and do his solos, both from North America…’ Well, that wasn’t going to happen, but in the end we made it work. It was just more complicated, the logistics were shit and everything was a lot more expensive! [Laughs] But we got it done in the end. I think we really wanted to get it done.”

From the belligerent fury of recent single Deceiver, Deceiver and the dramatic, viciously melodic House Of Mirrors to epic and brutal deep cuts like In The Eye Of The Storm and Spreading Black Wings, the new Arch Enemy album feels like a celebratory encapsulation of everything that has made the band such a vital force.

All of their cherished trademarks are present and correct, from majestic, heart-rending guitar hooks and harmonies through to an unremitting barrage of catchy but crushing riffs, but this is a sharper and more ferocious Arch Enemy than we have heard before. Deceivers could not have been created by any other band, but somehow this one feels like a bold reaffirming of musical values.

“I feel a responsibility there, to carry that heavy metal tradition to our best ability,” says Michael. Some people might say it’s a formula, but I just think it’s songwriting! I’ve been at it for a long time now, I’ve seen so many things come and go. People have said that guitar solos are out, or it’s all about industrial metal or rap-metal or it’s deathcore… there have been so many trends, but my focus has always been on the roots of heavy metal and hard rock songwriting, with quality guitar parts and stuff like that! [Laughs] You’ve just got to tweak it and find little things that you haven’t done before, and we always find something new to do.”

One of the new album’s most startling moments arrives during opening track and ready-made crowdpleaser Handshake With Hell. A classic, exhilarating slab of prime Arch Enemy perfection, it boasts a jaw-dropping vocal performance from the ever-versatile Alissa White-Gluz, with both clean and harsh vocals woven through the pristine riff-powered assault. As an album opener, it’s an audacious one. “Yeah, it was just to shove it in people’s faces, really! [Laughs] Make people talk, you know? We need that, 25 years into our history. We’ve been treading that line carefully, because when we brought Alissa into the fold we knew that, okay, she can do this and this, she can do what Angela did and she can do what Johan [Liiva, original AE vocalist] did, but she can also do this other thing. We have our sound and all the melody has really come from the guitars up to that point, but Alissa is amazing and it really works.

Anyway, after 25 years and when it’s your 11th studio album, are you not allowed one song that’s a bit different? [Laughs]” Arch Enemy fans have learned to expect their favorite band to sound immaculate. Deceivers once again belongs firmly at metal’s cutting edge, but a change of environment and a change of collaborator has brought new depth and texture to the band’s sound, while helping to hammer home those metal hooks with more intensity than ever. “We did the drums with Jacob and then we went back to Sweden and did the guitars ourselves,” Michael explains. “It takes so long to do that, so we thought it made sense to come home. Then Daniel engineered that as well. We did the bass and the solos in Sweden, and then we went back and did the vocals with Jacob in Denmark. He put it all together and mixed and mastered it. We were going to fly Jeff in to do his solos, but then he couldn’t come, so he ended up doing his solos in a studio in Seattle. Working with Jacob was great. With the vocals, he was amazing. He gets such a great sound and performance out of the people he works with. He’s a super nice guy and we really enjoyed it.”

The greatest bands always rise to the occasion. Arch Enemy are back, with one of their most defiant and uplifting records to date: a magnificent eruption of pure fucking metal, Deceivers is an invigorating, world-class shot in the arm.

Meanwhile, Arch Enemy are primed and ready to return to their natural habitat, well-equipped with new anthems and still enjoying every last second of their steel-plated mission. “We can’t wait to get back out there,” Michael Amott concludes. “I’ve always said that I’m ready to come back and play when it’s safe for everybody. The last few years have been incredible for us. It’s bizarre, because our new material is the most popular material that we have in the live show. Hopefully we can add a few more audience favorites from the new one, too!”

Check „Deceivers“ on all digital platforms: